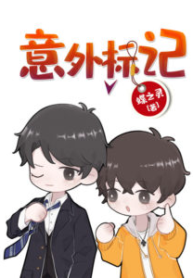 Pei Shaoze unintentionally heard about a novel called Accidental Mark. Once he woke up, he found he had transmigrated into the alpha scumbag in the book, Pei Shaoze. The omega protagonist of the novel, Cheng Xia happened to have his pheromones out of control. The original scumbag not only took the opportunity to mark the protagonist but also killed the protagonist’s parents and ruined his reputation. The protagonist was completely blackened and returned five years later to stab the scumbag to death.

Pei Shaoze, “……” What type of melodramatic plot was this? Why not invest well in movies and TV shows when he was the boss? His brain was used to bully the protagonist. No wonder why he would be stabbed to death.

Therefore, he thoughtfully sent Cheng Xia home and helped select a school drama for Cheng Xia. “This drama is suitable for Cheng Xia and has the potential to be popular.”

It turned out to be really popular. Cheng Xia said, “Thank you, President Pei!”

“Cheng Xia should expand his shows and challenge himself.”

Cheng Xia whose fans soared to the tens of millions. “Thank you so much, President Pei!”

“Do you want to try this drama? I think you are talented enough to handle this difficult role.”

At the awards ceremony, Cheng Xia said, “The person I want to thank most is President Pei!”

On Pei Shaoze’s birthday, all the stars of the company came to congratulate him. After the party, Cheng Xia personally sent Pei Shaoze home. The young man’s cheeks were slightly red and his eyes were shining as he stared at Pei Shaoze. “President Pei, in fact, I know your feelings toward me and I like you very much.”

Later, it was found that Pei Shaoze was a producer in every one of Cheng Xia’s shows.

The fans said, “This alpha is pretty good. Xia Xia, hurry and chase him!”

—Give you the most tolerant love and help you spread your wings to fly high.

Survival Story Of A Sword King In A Fantasy World

Acting, Business Management, Businessmen, Chapters Reviews, Cute Story, Handsome Male Lead, Love Interest Falls in Love First, Misunderstandings, Modern Day, Mpreg, Multiple POV, Omegaverse, Seme Protagonist, Showbiz, System Administrator, Transmigration
We use cookies on our website to give you the most relevant experience by remembering your preferences and repeat visits. By clicking “Accept”, you consent to the use of ALL the cookies.
Do not sell my personal information.
Cookie settingsACCEPT
Manage consent