From Sidekick to Bigshot 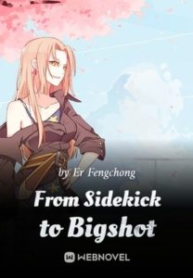 Previously, Jian Yiling was the supporting character who was destined to be cannon fodder. However now, with the memories of future events, Jian Yiling who had crossed into the novel transformed into a hidden big shot. Not only is Jian Yiling not interested in the male protagonist, but she also leaves the people around her in astonishment and bewilderment.
Originally, her brothers hated her. Now, they were all fiercely protective of her.
“Yiling gets frightened easily. Don’t scare her.”
“Yiling hasn’t been to distant places. Don’t scam her.”
“Yiling has a weak body. Don’t bully her.”
Everyone else wanted to cry in disbelief. Are you sure that she is cute and easily bullied? Who dares to bully her! When they all thought that the Jian brothers were enough to deal with, there was another one that topped the rest.
Master Sheng: “Yiling is very delicate. She shouldn’t be angered. If you make her angry, I’ll cut you up and make you into a broth!”
Everyone else: “Master Sheng, I think there’s something wrong with your eyes! I recommend you to go to the ophthalmologist!”

Every World Seems Not Quite Right (Quick Transmigration)

May 28, 2021
We use cookies on our website to give you the most relevant experience by remembering your preferences and repeat visits. By clicking “Accept”, you consent to the use of ALL the cookies.
Do not sell my personal information.
Cookie settingsACCEPT
Manage consent

This website uses cookies to improve your experience while you navigate through the website. Out of these, the cookies that are categorized as necessary are stored on your browser as they are essential for the working of basic functionalities of the website. We also use third-party cookies that help us analyze and understand how you use this website. These cookies will be stored in your browser only with your consent. You also have the option to opt-out of these cookies. But opting out of some of these cookies may affect your browsing experience.
Necessary Always Enabled
Necessary cookies are absolutely essential for the website to function properly. These cookies ensure basic functionalities and security features of the website, anonymously.
Functional
Functional cookies help to perform certain functionalities like sharing the content of the website on social media platforms, collect feedbacks, and other third-party features.
Performance
Performance cookies are used to understand and analyze the key performance indexes of the website which helps in delivering a better user experience for the visitors.
Analytics
Analytical cookies are used to understand how visitors interact with the website. These cookies help provide information on metrics the number of visitors, bounce rate, traffic source, etc.
Advertisement
Advertisement cookies are used to provide visitors with relevant ads and marketing campaigns. These cookies track visitors across websites and collect information to provide customized ads.
Others
Other uncategorized cookies are those that are being analyzed and have not been classified into a category as yet.
SAVE & ACCEPT
Powered by