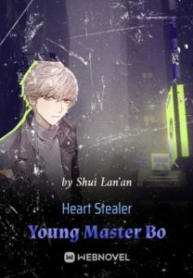 “If you run away again, I will destroy the world!”

Bo Yucheng watches the vixen who intently tries to escape and gets his hands on two marriage certificates instantly.

“If you dare to escape illegally again, I will use legal means to bring you back.”

The girl nods her head fervently.

From this moment on, Young Master Bo has become addicted to pampering and protecting his wife.

However, there are rumors that Mrs Bo is an ugly, idiotic, and s*upid woman from a poor family background, making her undeserving of Young Master Bo’s love and favor.

Hence, billions of fans from all over the world become unhappy. “Who dares to talk bad about our goddess?”

The people from world-class medical research institute are also annoyed. “Who is so blind to belittle the successor of our institute?”

Even the First Young Master of the wealthiest family is enraged. “I heard that someone is looking down on the daughter of the Shi Family?”

Everyone is dumbfounded and shocked as they look at the girl who is placed on the pedestal in various fields.

Young Master Bo pulls his wife into his embrace immediately and smirks. “If anyone dares to provoke my wife again… they shall just be put to death.”

[A wolf in sheep’s clothing VS A beautiful queen]

After the Rebirth of the Unbeatable Queen

A Monster Hunter Born of Capitalism

I Got Bitten After Transmigrating into a Pseudo-Beta

Academy, Beautiful Female Lead, Entertainment, Female Protagonist, Handsome Male Lead, Hiding True Abilities, Hiding True Identity, Medical Knowledge, Music, Poisons, Rebirth, Wealthy Characters
We use cookies on our website to give you the most relevant experience by remembering your preferences and repeat visits. By clicking “Accept”, you consent to the use of ALL the cookies.
Do not sell my personal information.
Cookie settingsACCEPT
Manage consent