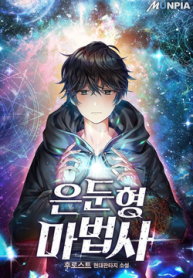 “Channel,” a link to another dimension that opened one day all over the world.

At the same time as the channel is opened, ethnic groups appear on Earth, and mankind awakens magical talents.

But… …Yoon Min-joon, who was able to use magic long before the channel opened. A forced knit escape of a reclusive loner who was once the only wizard on earth.

“It’s dangerous outside the house.”

Daqin: Zulong Asked Me to Be the Prince

Watch Out! Danger Ahead