Holding You Into My Arms 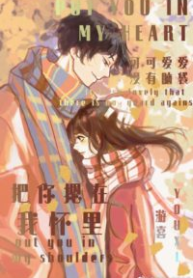 Shen Zhan, a talented young man of Huaqing University, has a face of an enchanting immortal and possessed countless of admirers.

He is indifferent and lazy, looking at everyone as if they aren’t worthy of his sight.

According to his closest classmates, Shen Zhan, with an IQ of less than two hundred, hates s*upid women the most.

Lin Jiayin from the dance department has a fair complexion and sweet looks.

She was booked by the chief of the National Opera.

She is naturally dull and a little s*upid, and she often makes people doubt life.

Both of them were entitled as the CP in which makes the school proud, but will never get together.

Until one day, someone saw Shen Zhan taking Lin Jiayin’s hand and walked into Haagen-Dazs to buy a limited cherry blossom ice cream to feed her personally.

The roommate of Lin Jiayin couldn’t help but ask: “I heard that Shen Zhan is your boyfriend?”

Lin Jiayin, who had just thrown Shen Zhan under the bus, denied it nervously: “No, don’t talk nonsense!”

The next second, Shen Zhan opened the classroom door and walked over infront of her: “Mom told you to go home for dinner tonight.”

Roommate, who Lin Jiayin was talking to: Mom? Are they married?!

Shen Zhan smiled: “…I didn’t tell you to roll into my arms.”

Lin Jiayin hugged his waist, raised her head and said aggrieved: “Who will love you after I roll.”

Although sometimes she is s*upid and It seems to have no brain, I have to admit that I love her. ——Shen Zhan

Your Majesty, Eunuch Lin Is Pregnant

Beautiful Female Lead, Early Romance, Female Protagonist, Handsome Male Lead, Modern Day
We use cookies on our website to give you the most relevant experience by remembering your preferences and repeat visits. By clicking “Accept”, you consent to the use of ALL the cookies.
Do not sell my personal information.
Cookie settingsACCEPT
Manage consent