Thank you for Waiting, Mister Tang! 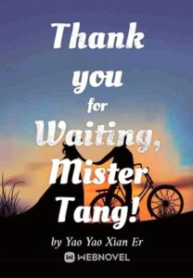 Forced out by her step-mother, she was driven to desperation and had no way of surviving other than to sign herself away and marry herself into a rich and influential family.
Three years into the marriage, her wealthy husband had spoiled her to heavens.
The only problem was that they had no inheritors in their family.
Inside the luxurious mansion, Pei Qiqi angrily threw a stack of newspaper onto the man, “The article is claiming that I am a hen who cannot lay eggs! But Tang Yu, it’s you who has issues!”
The man put down the newspaper and agreed to what his young wife was saying, “Why would they write false information? Your zodiac is the pig!”
“Tang! Yu!” She stomped her feet out of anger.
The man grinned, “So what we have no kids? You are my little baby.”
Pei Qiqi thought, how did this scene change so fast!