The Adventures of My All-Rounder Wife 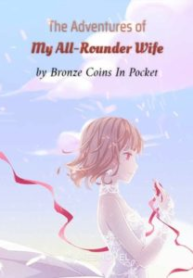 The all-powerful boss is stripped of his identity again!

One is handsome while the other is proud; the two-faced refined rascal versus a cynical girl with hidden identities.

Everyone secretly jokei that Master Mo’s wife is an ignorant and incompetent little tyrant.

Bad at her studies? Lu Mian emergei as the top student for science at her college entrance examination.

No talent? Lu Mian shows everyone how competent she is at multitasking by playing the piano with one hand, and painting with the other during a live performance.

A prodigal? She makes a small fortune in just two days with her limited knowledge.

Boxing, Go chess, appraising treasures, car racing… Bring it on! She can do them all.

The soft-spoken Xiao Qimo adjusts his glasses with pride. “Who else has something to say?”

One of his subordinates raises his hand cautiously. “Master Mo, your wife seems to be the one who single-handedly destroyed the illegal laboratory.”

Xiao Qimo looks at his wife who is quietly practicing calligraphy. “That’s impossible!”

During the general meeting for the International Elite Organization, both Xiao Qimo and Lu Mian wear a mask. They take the stage and succeed as the organization’s Chief and Deputy Chief, respectively.

The Deputy Chief beside me looks like my wife. This is Xiao Qimo’s thought.

The Chief looks like someone I know. Lu Mian is thinking the same thing, too.

Soon, the newly appointed Chief is seen blocking his deputy at the ladies’ room.

What happens when two strong and uncorrupted individuals fall for each other?

Chapters Reviews, Clumsy Love Interests, Female Protagonist, Handsome Male Lead, Protagonist Strong from the Start
We use cookies on our website to give you the most relevant experience by remembering your preferences and repeat visits. By clicking “Accept”, you consent to the use of ALL the cookies.
Do not sell my personal information.
Cookie settingsACCEPT
Manage consent