The World of Masks 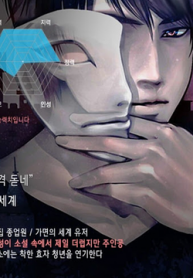 <The world of masks>

The era is a modern background of virtual reality game deception.

The protagonist, whose parents died in a traffic accident and made a flower shop alone,

He’s just a good young man in the neighborhood, but with his psychopath personality and urge to murder inside.

He is full of people. In order to address this need, some of the burglars and rapists

An old man appears to him and gives him a connector to the game called’The World of Masks’.

A virtual reality game was developed, but with a reaction of about 1/10 of that of reality,

Compared to the similar level, the world of masks is initially 2/3 responsive with a realistic background.

When people who died in the game attracted people’s interest, they also died in shock.

It was forbidden by law, but rather, it was a reaction to PK freedom

It is a game that is illegally operated.

It is the plot of this novel that such a protagonist plays the’world of masks’.

It appeared up to 90 times now, but it seems to be a novel in the middle. Like I said before

The main character is a psychopath murder marathon (I haven’t murdered it in reality).

It shows properly. In reality, I’m just doing a good youth cosplay in the neighborhood.

And’the world of masks’ is a game, but in the game, the ability can be reflected in reality.

In the game, the power of a god or a devil is reflected, such as rewards are also obtained in reality.

However, if the goal of another player is mone

My Doomsday Territory (My Apocalypse Domain)

Marvel: Those Years I Was Undercover in S.H.I.E.L.D

Call Me The Mother of Quick Transmigration