The Youngest Son of a Master Swordsman 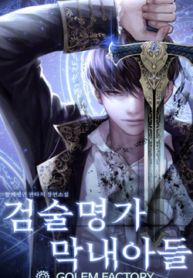 The youngest son of Looncandel, the greatest swordsman on the continent.

The worst blunt force in the history of Looncandel.

Once again, he was given a chance to die in vain after being driven out miserably.

“How do you want to use this force?”

Memory of previous life, overwhelming talent, and contract with God.

The preparation to be the strongest is finished.

Eventually, Jin was abandoned by his family and kicked out, and just before he died, he learned magic.

Yes. Jean’s talent was not a sword, but a magic. After only three years of learning magic, Solderlet, the god of shadow, offers him a contract.

And it turned out that Jin was under a curse that he didn’t even know about, so he couldn’t take advantage of his ability.

I was hoping that with the help of Solderlet, I would become a magician who would do both magic and sword work. I was caught up in a ridiculous thing and died… I’m about to give up because I think it’s over, but when I wake up, why am I a baby?

Beautiful Female Lead, Calm Protagonist, Cheats, Clever Protagonist, Genius Protagonist, Handsome Male Lead, Hard-Working Protagonist, Korean, Magic, Male Protagonist, Monsters, Overpowered Protagonist, R-15, Reincarnation, Special Abilities, Sword And Magic
We use cookies on our website to give you the most relevant experience by remembering your preferences and repeat visits. By clicking “Accept”, you consent to the use of ALL the cookies.
Do not sell my personal information.
Cookie settingsACCEPT
Manage consent