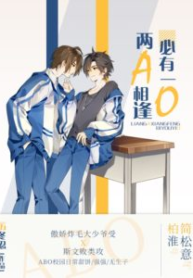 Until his sworn enemy who lived next door when he was a child transferred into his school. He didn’t just steal his spot as the most handsome boy, he even stole his spot as the top student.

Most importantly, he had even f*cking presented as a first-rate alpha before him.

Towards this, Jian Songyi said, one mountain can’t house two alphas! If he didn’t hurry up and shoo this son of a bit*h Bo Huai away, then he wasn’t an alpha!

Well, Heaven had eyes. The next night, right in front of Bo Huai, he presented as an omega.

Jian Songyi resolved to become an omega with strength of character. Even if he went in heat, even if he forgot to bring his inhibitors, even if he were to die right then where he stood, he would never let Bo Huai mark him!

Bo Huai could only coax him in a low voice. “Let me take a bite. In the final exam, I’ll give you first place in the grade.”

Jian Songyi couldn’t take the seduction of his silky soft breath and gave in.

The day exam grades came out, Jian Songyi looked at the honor roll that said “First Place: Bo Huai” and puffed up in anger. “Bo Huai, you big liar! You beat me by a point again!”

Don’t Be a Kept Man

The World of the Pirate Consort

Bickering Couple, Childhood Friends, Comedic Undertone, Handsome Male Lead, Love Interest Falls in Love First, Modern Day, Omegaverse, Slow Romance, Smart Couple
We use cookies on our website to give you the most relevant experience by remembering your preferences and repeat visits. By clicking “Accept”, you consent to the use of ALL the cookies.
Do not sell my personal information.
Cookie settingsACCEPT
Manage consent