Worship Me, I Can Make You Rich 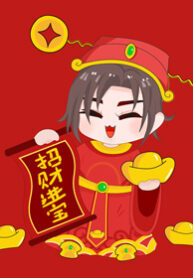 On the first day of work for the little intern God of Wealth, Zhang Zhou was filled with confidence and complacency. He looked at the man collecting junk from a pile of garbage and said: “Worship me, I can make you rich.” The big and tall man stubbornly continued to collect junk, ignoring him completely. Not wanting to lose his job on his first day at work, Zhuang Zhou did his best at persuasion: “Men can’t be so lacking in ambition. You can’t collect garbage for a lifetime, right? How will you find a wife in the future?” The Imperial Admiral, Wen XiaoYun, self-destructed with the alien Insect Empress. Surviving by a fluke, he landed on a long abandoned tr*sh planet. He could only search for installable parts from a pile of abandoned garbage to fix his mecha and mend his communication array. The days spent on the abandoned tr*sh planet were very long and tortuous. Fortunately, there was a little friend accompanying him. En. However, this little friend was a little s*upid. It’s alright. He’s still pretty cute. Returning home victorious, the Admiral-daren brought his sweetheart back to the Imperial capital planet, igniting the attention of the entire galaxy. The reporters asked: “Admiral-daren, can you tell us what’s your criteria for choosing a spouse? What about Mister Zhuang Zhou attracted you?” After thinking for a moment, the Admiral-daren said: “Many people approach me for my status and power. Only he, is willing to collect garbage with me.” The entire galaxy: “????” At this time, however, the little God of Wealth was silently hugging himself. Oh no! Something unexpected seemed to have happened when he descended to Earth! He had somehow arrived in an intergalactic era! – Description from Novelupdates Details Show more Show more