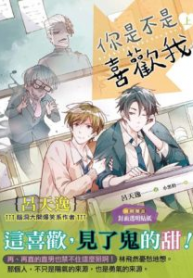 Short, rich, and handsome, Lin Feiran was always the center of attention. But after transferring schools in his second year of high school, he discovered that his limelight was snatched by his Adonis classmate, Gu Kaifeng.

Lin Feiran was very resentful, and he and Gu Kaifeng became archnemesis (one-sidedly). Although the two lived together, they were like strangers.

When Lin Feiran went back home to attend his grandfather’s funeral, he accidentally inherited the Yin-Yang eyes that had been passed down from generation to generation. After gaining the ability to see ghosts, the timid Lin Feiran discovered that his two-person dormitory was actually a sixteen-person (ghost) room. Every day, he was scared to the point of collapsing.

The more aggravating thing is that because of Gu Kaifeng’s innate body constitution, he possessed an abundant amount of Yang energy. Lin Feiran found out that whenever he touched Gu Kaifeng, Gu Kaifeng’s Yang energy could temporarily disable his Yin-Yang eyes. A light touch would disable it for five minutes, a kiss for an hour, and so on…

Lin Feiran had no choice but to throw himself into his archnemesis’s embrace. This complete reversal in attitude to being intimate with Gu Kaifeng persisted every day from morning till night.

When sleeping, he must squeeze in the same bed as Gu Kaifeng. Going to the toilet? He must drag Gu Kaifeng with him. Homework? It must be done hand-in-hand with Gu Kaifeng… He also had to try his best to persuade the teacher to make him Gu Kaifeng’s deskmate. Every day in class, he would rub Gu Kaifeng’s calf with his foot beneath the desks…

Following the clingy little bastard’s sudden change in personality, the initially shocked Gu Kaifeng gradually became smitten. Every day he would chase Lin Feiran to flirt with him, make crazy confessions, and even routinely push him against the wall and kiss him…

Gu Kaifeng turned around, stopping his hand: “After you just rejected me, you come back to flirt with me!?”

Lin Feiran: “Who’s flirting with you! I was careless and touched you; don’t imagine that I like you back.”

I Became Invincible After Sweeping The Floor For 70 Years

The Blind Date is the Daughter of the Gods

Domineering Crossing: The Ghost Eye Concubine of the Storm King